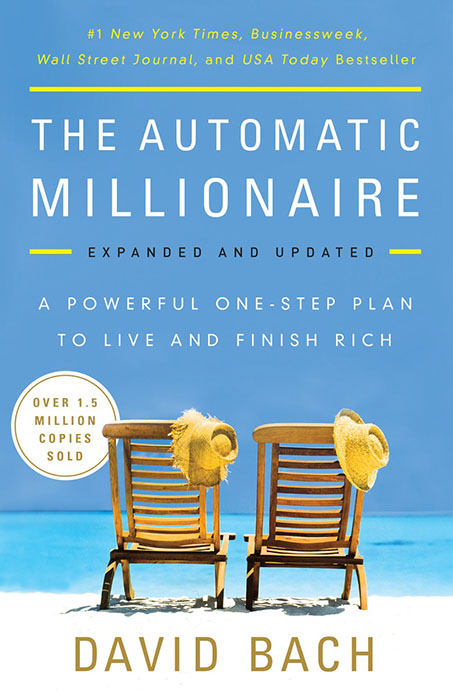 Wow!  Thank you CNBC for including the brand new edition of The Automatic Millionaire on your incredible 12 best reads for 2017.

This is a simply fantastic list of great books, some classics and some new.  I have already devoured personally Tim Ferris’s book Tools of Titans.  Next up, I personally plan to read The Essays Of Warren Buffet.

Enjoy the list.  And let me know what else you would have added?  Maybe we’ll create our own list this year. Hill’s timeless personal fiance classic will help you understand that getting rich is more about mentality above anything else. In fact, he barely mentions the words “money,” “wealth,” or “finances.” Rather, he explains the psychological barriers that hold many people back from building fortunes — and teaches you how to start thinking your way to success. Rich people tend to believe starting a business is the fastest way to make money. This read, endorsed by self-made billionaires Bill Gates and Warren Buffett, will teach you just how to do that … but not the way a conventional business book does.

“Unlike a lot of today’s business writers, Brooks didn’t boil his work down into pat how-to lessons or simplistic explanations for success (How many times have you read that some company is taking off because they give their employees free lunch?)” Gates explains. “You won’t find any listicles in his work. Brooks wrote long articles that frame an issue, explore it in depth, introduce a few compelling characters, and show how things went for them.”

Don’t let the 1969 publication date throw you off. While a lot has changed in the business world since the 1960’s, the fundamentals of building a strong business have not, Gates writes, adding, “Brooks’s deeper insights about business are just as relevant today as they were back then.” One of the most effective ways to build wealth is to invest. At least, if you do it correctly.

Bogle, founder of the Vanguard Group and creator of the world’s first index fund, details the simplest and most efficient investment strategy: Investing in low-cost index funds.

Legendary investor Warren Buffett also says that every investor, large and small, should pick up a copy. 4. “The Essays of Warren Buffett” by Warren Buffett and Lawrence A. Cunningham
If a blurb by Buffett doesn’t entice you, get directly inside the billionaire’s head with this collection of letters and notes written by the “Oracle of Omaha.”

The 700+ page book offers a clearer picture of Buffett’s philosophies on business, investing, and life.

5. “Tools of Titans” by Tim Ferriss What does it take to be a billionaire? Best-selling author Tim Ferriss’ latest book explores the daily routines and habits of celebrities, professional athletes, hedge fund managers and others.

Ferriss went straight to the sources and interviewed more than 200 world-class performers.

For a sneak peak, check out one, peculiar habit that the wealthiest, most successful people share.

6. “The Richest Man in Babylon” by George S. Clason Nearly a century ago, Clason revealed the “secret” to getting rich in his 1926 personal finance classic.

It turns out that the “secret” isn’t much of one. All it takes to get rich is mastering a few simple concepts, such as paying yourself first and living within your means, which Clason preaches via a collection of entertaining parables. Kiyosaki shatters the myth that you need to earn a lot of money to get rich in this best-seller. By telling the story of two dads — his own, and the father of his best friend — he explains how to build wealth even with a small salary.

Additionally, Kiyosaki challenges the popular belief that your house is an asset, details the differences between how rich people and average people choose to get paid, and emphasizes the critical difference between an asset and a liability.

8. “The Automatic Millionaire” by David Bach 9. “How Rich People Think” by Steve Siebold
When Steve Siebold started interviewing hundreds of millionaires and billionaires, he was “completely broke and searching for answers about success I wasn’t finding in the classroom,” he writes.

“What I discovered was, to get rich, I had to learn to think like a rich person. … Once I changed my thinking, the money started to flow.”

Anyone has the opportunity to build wealth, he stresses in “How Rich People Think,” and it all starts with changing your mindset. For a sneak peak, check out the number one way rich people view the world differently than the average person.

10. “Be Obsessed or Be Average” by Grant Cardone As Siebold says, to get rich, you have to learn from those who have already done it. Self-made millionaire Grant Cardone knows a thing or two about managing money: The entrepreneur has built five companies and a multi-million dollar fortune.

In the best-selling author’s latest book, he emphasizes that if you want real success, you have to be hungry, hyper-focused, even obsessed.

While Cardone offers some contrarian advice — he discourages investing in a 401(k) plan and buying a home — his wealth-building strategies helped him go from broke at 25 to earning his first million by age 30.

11. “The Power of Broke” by Daymond John “Shark Tank” investor and entrepreneur Daymond John turned $40 worth of fabric into a $6 billion brand, FUBU. Along the way, he’s been rejected a lot and has lost a lot.

Being broke, however, offers at least one major advantage: It sparks creativity and out-of-the-box solutions, he explains in “The Power of Broke.”

Don’t write off your chances of wealth and success if your bank account is low, he suggests. Use it to your advantage.

12. “You Can Negotiate Anything” by Herb Cohen If you want to earn more in 2017, a simple yet often overlooked strategy is to negotiate your salary.

If you’re nervous about approaching your boss to ask for a raise, try Cohen’s best-seller. It will help you get what you want, and what you deserve.